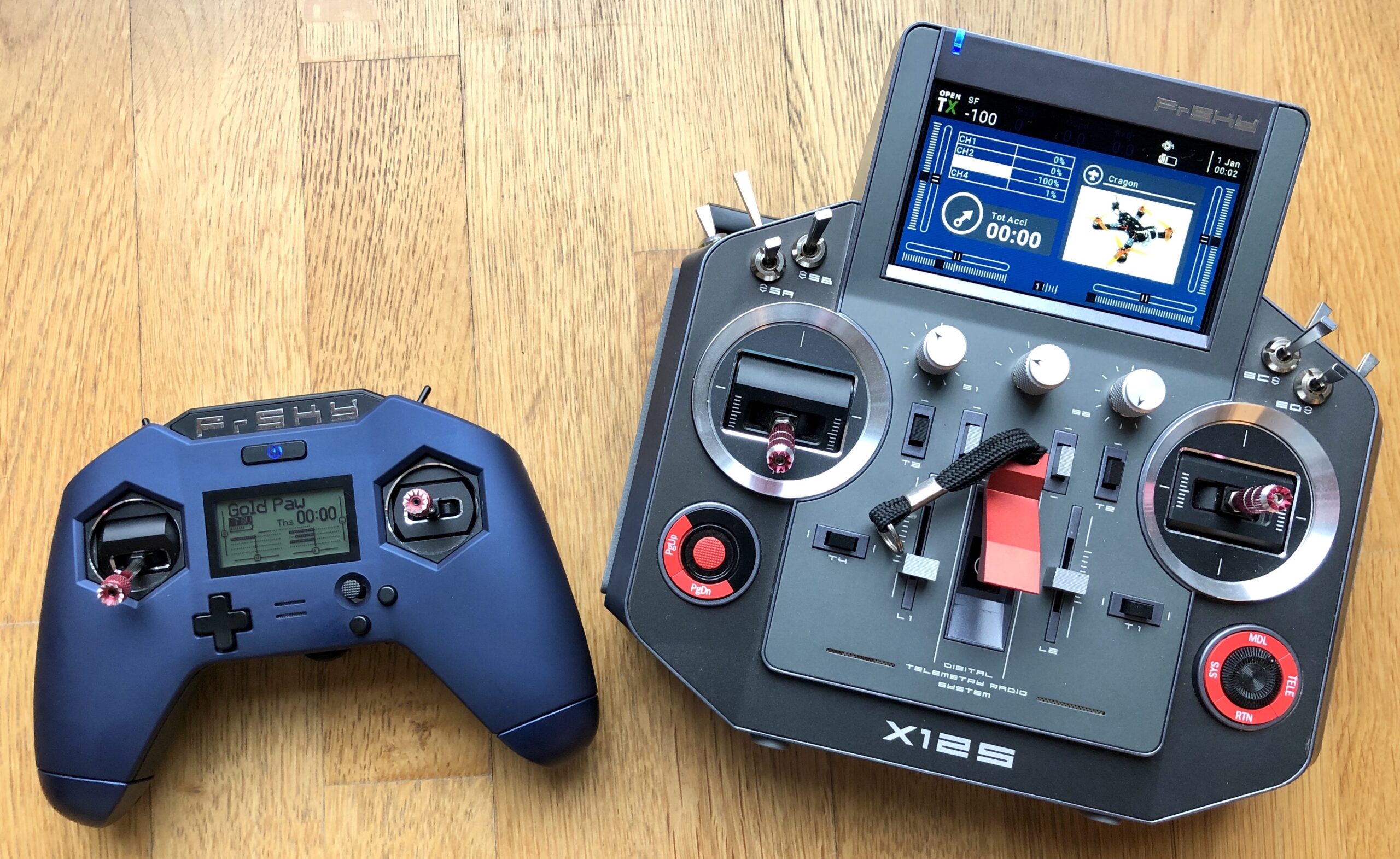 I switched from using a FrSky Horus X12S to a FrSky X-Lite Pro. Here’s my experience …

My rational for switching was size, and for this, I’ve never looked back. My flying experiences take me to places that require a hike with a rucksack of drone gear, and then flying 5 or so batteries. The weight and dimensions of the X-Lite (390g) vs the X12S (1320g) was a major consideration in my X-Lite Pro purchase. With the X-Lite Pro, I found that it’s possible to take a cut down selection of gear in a hiking backpack rather than a not-so-ergonomic drone backpack. Sandwiches, the X-Lite Pro, FatSharks, several batteries and a few spares go inside the hiking backpack, and the drone and water bottle on the outside. This allows a hike to include flying a drone, as opposed to being the sole reason of the day.

My experience was not immediately smooth. I bought the X-Lite Pro, but it comes without batteries. Eh?! So, another order & wait for a pair of hard-to-come-by 18500 Li-ion batteries. However, the X-Lite Pro fairs better than the standard X-Lite – it’s now possible to re-charge the battery via the USB port, which was previously not possible without a mod.

Next up – stick configuration! On the X-Lite Pro the stick layout (mode 1 vs 2) is DIY – you have to adjust various screws to change the stick mode and stiffness. For 10 minutes, you’re wondering if you’ll ever be able to control a drone, but one eventually gets the right tension.

The FrSky protocols were a multi-day Googling battle for me, having previously used the available Horus X12S D8/D16 protocol linked to a R-XSR receiver. The X-Lite Pro does not support this, but a new beta OS version supports the ACCESS ACCST D16 protocol. Thus down the rabbit hole of an X-Lite Pro beta OS upgrade, and then a re-flash of all R-XSR receivers with the proprietary ACCST D16 protocol (via interface on controller). I lost one R-XSR receiver along the way by stupidly over-pressing the tiny re-flash button on the R-XSR and breaking it off.

Finally … control setup, Betaflight configuration and switch configuration. This I did again from scratch, referring to my previous X12S configuration. I found that the number of switches are far more restrictive than the Horus X12S. There are *just* enough for the core functions. I ended up using the available switches as follows:

The X-Lite does take getting used to, primarily as the unit and controls are smaller than the X12S. The X-Lite levitates towards thumbing, rather than pinching (see thumbing vs pinching).

A dusting of snow sets off December flying . . .

Time to go digital! 📺 And before that, lots of

Chilled flight before the snow comes 🍁🍂 . .

Escaping the summer heat on a glacier 🧊🧊 .

A long hike to Sandpass for awesome views of Chli